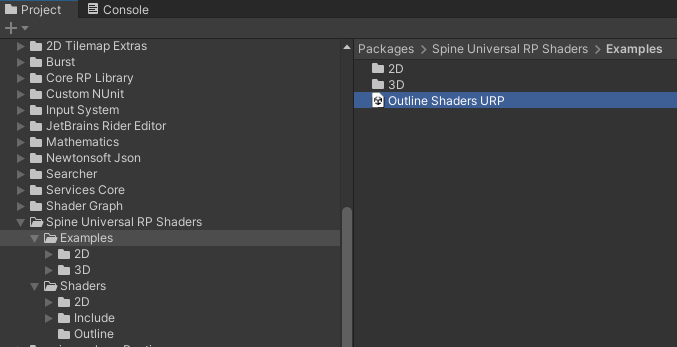 When I try to copy Examples folder from PackageCache to Assets, I get a bunch of warnings. And when opening the copied URP Outline example scene, it's lost references to SkeletonData assets amongst other things and is not playable.

Sorry for the confusing. Please copy only the scene files, not the entire folder. Other files can be left in the Library folder.

Misaki писал(а):Sorry for the confusing. Please copy only the scene files, not the entire folder. Other files can be left in the Library folder.

I tried copying just the scene file to Assets directory in a completely new Unity 2021.3.6f1 project with the same result - a bunch of missing script and skeleton data asset dependencies.

I'll look into it, thanks.

Copying the "URP 2D Shaders" scene went a little bit better since it actually runs but it displays weirdly:

It also doesn't let me change the shader:

Installing from a locally downloaded .zip let me access the scenes directly from Library/PackageCache. This also appears to have solved dependency issues but the visual blue box artifacts remain a problem.

Thanks for posting the additional screenshots. The problem with the missing scripts at the Outline Shaders URP scene is that it uses some existing example scripts from the spine-unity-examples package. To resolve the missing script problems, please install this example package as well, as listed on the download page:
spine-unity Download: Download
To save you some time, the git URL is as follows: https://github.com/EsotericSoftware/spine-runtimes.git?path=spine-unity/Assets/Spine Examples#4.1

I will add some description text to the example scenes which point out these pitfalls and the respective solution. Thanks for reporting!