Hi guys,
I'm getting this error when trying to run the Photoshop to Spine script in Photoshop cc 2017.

I downloaded the script from here: https://github.com/EsotericSoftware/spine-scripts/tree/master/photoshop
Not using artboards in photoshop and have no hidden layers.

It looks like you downloaded the GitHub HTML page which shows the script code, rather than the actual script itself. Don't feel bad, you aren't the first one to do this! We've improved the instructions to make it more clear how to download the script:
spine-scripts/README.md at master · EsotericSoftware/spine-scripts

I've also had a problem with the PS to spine script! its been working since I've had the program, and suddenly it stopped. Now its asking me to save a PSD for every layer, not a PNG. I resaved the script with the one you linked to above and I get the same error. Any ideas?

I would like to mention that it SEEMS to only be an issue when I try to run this script on PS files that are smart objects that open to Illustrator, not smart objects made in PS. I don't remember this ever being an issue, but is it a known workaround? I just made a second file, rasterized all of the layers, and i had to drag them into a new file to wipe any lingering AI issues.
У вас нет необходимых прав для просмотра вложений в этом сообщении.

a.meyer could you send us your PSD so we can reproduce the issues? Either post it here, or send it to contact@esotericsoftware.com.

I would love to, but unfortunately its under NDA....I will try to re-create the error in a different file! Thank you

What google chrome does is if we right-click and "save link as," it downloads the Github HTML Page. What I did was I copied the code from GITHUB, opened the PhotoshoptoSpine.jsx file, deleted the code in it pasted the correct code. Now it works.

I am not sure why Chrome downloads the HTML on my end. Do I need to have a Github account?

You don't need to log in, but from the first link, you should click on the master folder

Then a new green button will appear on the right to download everything:

You unzip that folder and navigate to the Photoshop folder, where you'll find the script (:

Yep, you can download the zip as Erikari has shown, or you can right click this link and choose Save As to get the latest script:
http://esotericsoftware.com/git/spine-scripts/raw/photoshop/PhotoshopToSpine.jsx

Regarding a.meyer's problem, this turned out to be that the PSD had the image mode set to CMYK color. We've updated the script to automatically convert to RGB color when writing the PNGs.

In an unfortunate turn of events, I've run into exactly the same error as a.meyer. Similar situation too. I've been working on something on and off for a few weeks. Today I went to run the script and it produced the error above. I updated Photoshop and Java, which had no effect. I even installed ExtendScript, and that's starting to look like a can of worms I can't afford to open tonight.

If you'd like, I'd be happy to send along my PSD.

Grimbot, the problem was fixed yesterday. You can either update to the latest script, or convert your PSD to RGB color.

Thank you for fixing that issue!! Im so happy T_T!!!

Nate писал(а):Grimbot, the problem was fixed yesterday. You can either update to the latest script, or convert your PSD to RGB color.

Thanks... but it still doesn't work. The project has always been RGB and the new script seems to produce the same results.

@Grimbot, if you didn't already, please do send your PSD to contact@esotericsoftware.com (: thank you!

Thanks for the PSD, Grimbot. I don't see the "unexpected error", instead I see an informative error which describes a problem with layer names and how to fix it: 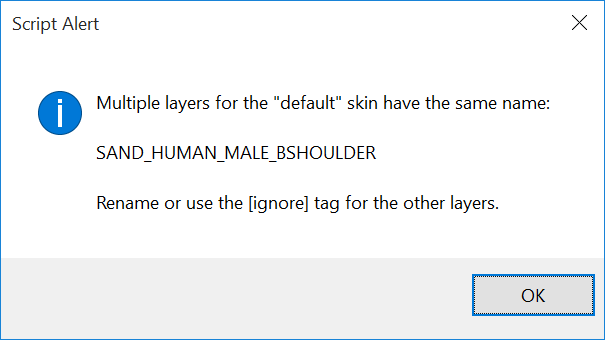 Note the old script had a checkbox to treat each group as a skin. The new script is much more powerful, but requires you to put [skin] in the name of the groups you want to be treated as a skin, eg "SAND_HUMAN_MALE [skin]". There are other very useful tags, like [merge], see here:
spine-scripts/photoshop at master · EsotericSoftware/spine-scripts

@Grimbot, I've looked at your file, and it's missing the tags, please look at the help section of the script, or at this thread to have a more detailed explanation: http://esotericsoftware.com/forum/customisable-character-9341

Thank you both. For whatever reason, Nate, I didn't get that error. I'm sure I would have once the other one was sorted out. And Erikari, I've never touched tags before, but I've never had so many folders. Good to know!

I was also running into the psd export thing. I was importing .exr files from a Maya render which uses 32 bits/channel option. Set Image > Mode > 8 bits/channel to fix it